Today we have updated the Posters & Merch department with some new items.

While examining our hidden stash we have now found some more vintage posters that we can offer you to buy.

Check it out and email us if you are interested.

Tomorrow on January 18 we will talk to PopDiggers again, and go through part six in this very ambitious and great series where all the 7" releases are presented.

A big thanks to Peter at PopDiggers for this job. Below are links to the first five entries.

We have a few shows booked for 2021 and we really hope they can be realized. Stay tuned and safe and check on updates here or on Facebook.

The posters we found in the vaults were very popular and after the weekends we will post new discoveries from the drawers.

The Nomads wish you a safe Christmas and a happy New Year!

Since the Corona situation keeps us away from the stages we are maintaining the domestic areas.

We have found a small stash of various posters in our drawers. We would rather see them up on your walls than taking up space at castle Nomada. Go to POSTERS FOR SALE and see if there's anything you like.

We are, like everybode else, waiting for the Corona pandemi to get away. Meanwhile we are maintaining our website with updates and corrections. Hopefully we can start play live shows after the summer. Very much looking forward to meet again soon. 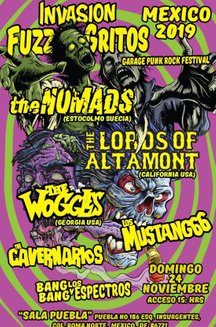 We are EXCITED to announce our first ever show in Mexico. The Festival FUZZ Y GRITOS have invited us to share the stage with The Lords of Altamont, The Woggles, Los Mustang 66, The Cavernarios ao. This is going to be a lot of fun. Buy tickets here.

New split w Sator and The Nomads is out  January 16 on Ghost Highway Records.

Sator: You Tore Me Down, Rub It In.

On Thursday october 27 we play together with The Fleshtones and Stupidity at Kägelbanan in Stockholm. It's a celebration night for the mighty Fleshtones to celebrate 40 years of Rock!

Last time (2010) we played with them at Kägelbanan The Nomads was awarded  "The International Super-Rock Award" by The Fleshtones.

Tickets are on SALE HERE

“Perennial garage rockers” (SPIN), The Fleshtones—Keith Streng, Peter Zaremba, Bill Milhizer, and Ken Fox—will celebrate their 40th anniversary with the release of their 21st album, The Band Drinks For Free. Out September 2 on Yep Roc Records, the album is now available for pre-order with an instant download of “Love Like A Man.”

Recorded at Florent Barbier’s CCP Sound Studio in Brooklyn, New York, The Band Drinks For Free features 12 songs that take stock in the band’s remarkable career, and is a testament to surviving with a great attitude at great odds.

Dubbed “America’s Garage Rock Band” and “The Kings Of Garage Rock,” The Fleshtones debuted at CBGB in May 1976, and were the first band to play at Irving Plaza and Danceteria in Manhattan, Maxwell’s in Hoboken, New Jersey, and the first to be booked at the original 9:30 Club in Washington, D.C.

Well into their fifth decade of making believers out of the most jaded naysayers with their mongrel stew known as “Super Rock,” The Fleshtones have been the subject of books (Sweat by Joe Bonomo, Continuum Press 2007) and movies (Pardon Us For Living But The Graveyard’s Full, 2009) as well as amazement from fans and detractors alike.

17.00 Playing a couple of songs and signing some more records at SOUND POLLUTION

Later: Playing another couple of songs at the Pet Sounds After Party at Debaser Medis!

Yep, it's been 25 years and our friends at Universal Music are preparing a special anniversary remastered LP release with the extra bonus of a 7" single of "Dodgy Demos" including this never before released version of "Can't Keep My Mind Off You". At the time of this demo session (1990) we didn't have any words for it so Slim Harpo's "Tee Ni Nee Ni Noo" was used for scratch vocals....

You can now pre-order the limited Gatefold double 7" with The Nomads and The Maharajas.

Release date is set to March 15

Chaputa!’s Double Feature with The Nomads and The Maharajas.

On a gatefold double 7″. Don’t miss it – limited run of 500 copies only. Pre-orders will open soon.

Another exciting release is OUT!

150-gram vinyl in gatefold sleeve; limited to 500 copies. This is the first reissue of The Nomads' 1984 cassette Stagger in the Snow, originally released in Sweden in 1984; only available for impossible second-hand prices ever since. Beware -- this is by far the wildest and rawest sound of The Nomads, as they were in 1984. 29 tracks including covers of The Sonics, The Cramps, 13th Floor Elevators, The Kinks... ultra wild stuff. Remastered sound; includes liner notes.

It's out on BANG RECORDS

A Live album that was recorded at our favourit club in MADRID, El Sol, on a hot night in December

is now out on GHOST HIGHWAY RECORDINGS

ORDER your copy here by clicking on the album cover

With our song Miles Away.

Vote for us here:

Where The Wolfbane Blooms - 30 Years

Today it is 30 years since the release of the first longplayer by The Nomads. We will celebrate that by playing the record + other stuff on

two special occasions. Gothenburg at Sticky Fingers Dec 14 & Stockholm at Debaser Strand on Dec 21. Hope to see you there!!!

The Swedish band the Nomads are set to release Solna - Loaded Deluxe Edition on Career Records. This revised release of the 2012 Swedish only release will be available on both CD and vinyl. The vinyl edition will include a 17 song download card which collects rare ep and single tracks as well as the complete original track listing.

Career Records are pleased to have our friends signed to Career for their first new album released in the US since 2001. You can read more about the albumhere. We will begin offering this for sale in a few weeks. Release is set for the last week of August.

On saturday April 20 it is Record Store Day. The Nomads are going to sign the new EP "Loaded Deluxe EP" at Pet Sounds Record store at Skanegatan in Stockholm. Be there at 13.30 to meet us and pick up the new record that is a limited edition on yellow vinyl. See you.

Finally a North American release for "Solna"! Career Records http://www.careerrecords.com/ will release a special "Loaded Deluxe Edition" LP on September 1 with the added bonus of a download card featuring all of the songs from the "Solna" sessions plus the four tracks from the new EP. Here's what label boss Ron Sanchez has to say about it:

I first heard the Nomads when my wife Karen ordered a copy of the Swedish comp Real Cool Time and the famous bootleg Stagger In The Snow. I was fully impressed. Not too much later I formed the first Donovan�s Brain line up. In reaction to the �anyone can start a band� philosophy of the mid 80�s I figured a band playing the songs my bands had played in the 60�s would be a good idea. The other half of our set was taken from the Nomads catalog. It seemed to work.

A few years later we finally had the chance to see and meet the Nomads at Garage Shock. We found much common ground and developed a deep friendship. In 1999, the Nomads booked some free days on a tour to stop in Montana. Between drinking and grilling steaks we recorded the original version of Top Alcohol, a track for a Donovan�s Brain album and the still unreleased collaboration, No Cops, Haul Ass.

Career Records is not a full time operation. When Deniz Tek and I have records to release we turn the lights back on. In March of 2013 we opened the shop to release the new Deniz Tek and Donovan�s Brain albums. A few days later a message came through from Nix Nomad asking if we�d like to do an American release of the fab Solna album. My wish for some new songs was easily accommodated, as the band would be recording some track for a Swedish Record Store Day ep. The Career Records release of Solna � Loaded Deluxe will distill the best of these two records. A 12 track vinyl release and 16 track CD will please all Nomads fans, and mark the start of what could be a very interesting future for all parties involved.

The Nomads and Staffan Hellstrand together with Stockholm Strings:

Time to summarize 2012! Many thanks to everybody who bought/downloaded/streamed "Solna", our first new album in eleven years. Extra Special Thanks to Universal Music Scandinavia and Devils Jukebox Records for getting it out there, it's been a pleasure working with you guys.

Mega thanks also to everybody that came out to any of the 17 shows we've played after the release in april, we haven't done that many in one year since 2003! In 2013 we hope to be able to play some places we haven't been before, Japan, for example, is on the wish list.

All the best from The Nomads - Happy New Year!

There will be a SHOP button soon but until then...

2012-04-17 Tomorrow is the release of the new album SOLNA. We will hold a small party at Garlic & Shots, Broderna Olssons at Folkungagatan in Stockholm on Saturday April 21st (Record Store Day) between 18-21. Very welcome if you are in town!

Lots of exciting stuff happening right now: a new album and single in

april for Europe, US release following in the early autumn, and lots of

live action...watch this space for continuous updates on all the